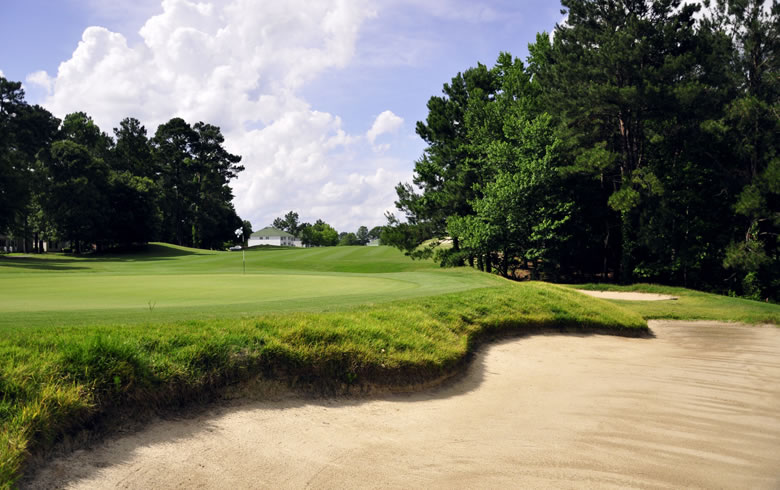 One of South Carolina’s most popular stopping-off points for golfers migrating south for the winter is slowly, steadily and tastefully being transformed into an affordable yet luxurious, resort-like destination.

A casual observer might be tempted to think that nothing ever changes around sleepy little Santee, South Carolina. And while it’s true that this tiny lakeside town with a population of fewer than 900 people has remained true to its origins, dating back more than a half decade, upon closer review you actually will discover that Santee has been quite busy lately making subtle but tasteful changes with the times.

Start with the new exit off I-95 with access to Santee that is going to open in 2016. There are high-powered Tesla charging hook-ups at Clark’s Inn, a new Conference Center, a 17,752-foot, state-of-the-art facility with three breakout rooms can host up to 1,200 people. The YMCA-run Santee Recreation Center and Waterpark, which opened last year, including an aquatics center with an 80,000-gallon pool separated into three sections for all ages, basketball courts, baseball fields, soccer and bocce fields and recreation pavilions — along with a thrilling, 300-foot slide that starts about 100 feet in the air and takes you on a tube down through the three loops.

And that doesn’t even include the golf, for which Santee has made its name through the years.   Check out the fully-equipped villas overlooking the beautiful Lake Marion Golf Course, situated alongside Santee National’s fairways or rising high above the big waters on Lake Marion’s north shore. Lake Marion has 24 villas available with 10 more currently under construction.

Fishing on the lake

Santee is set up like a sprawling resort, offering an array of more than a dozen accommodation properties designed to suit any taste or budget, from hotels and motels to well appointed two bedroom deluxe villas just a short walk from Santee’s famous southern hospitality, delicious cuisine and vibrant nightlife. When all the rooms around town are full, Santee’s population swells to 20,000.

You can’t top Santee’s convenience. Located on the south shore of Lake Marion, South Carolina’s largest freshwater lake where a number of world records have been set through the years for largemouth catfish and sea bass, Santee is dissected by Interstate 95 — almost exactly halfway between New York and Miami — and just off Interstate 26, midway between the Palmetto State’s popular cities Charleston and Columbia. Even before I-95 became an Interstate, the road was a most popular route for northerners traveling to and from Florida and many people stopped looking for a good meal and a place to bed down.

Because of that, among avid, budget-conscious golfers, Santee has morphed into a revered year-round destination. Within a mile of town, there are three outstanding courses that don’t cost a small fortune to play — a trinity has become sacred ground for golfers from all over North America. “Country-club good looks and municipal-course pricing,” wrote one publication. Santee National, Santee Cooper Resort and Lake Marion provide wide fairways, challenging greens, water hazards and impeccable maintenance, and have all been upgraded through the years. A few years ago a book called “From Cotton Fields to Golf Courses” was written spotlighting this most unlikely of golf Meccas. It is a pictorial history that chronicles the transformation of Santee’s profitable cotton fields into even more profitable golf courses — a must-read for anyone planning an affordable golf trip.

Santee Cooper Country Club, designed by George Cobb and opened in 1967, is the oldest of the three courses and arguably the venue you should never leave off any Santee itinerary, due to its prime positioning on Lake Marion. Set among majestic pines, this classic challenge winds its way from an opening tee shot over water, through a series of scenic dogleg holes, with elevated greens and featuring some of the best par 3s in the region.  The best closing hole in Santee is unquestionably the par-4 No. 18 that provides a panoramic view of Lake Marion from its elevated green.

Another popular golf course on the menu at Santee is the Porter Gibson-routed Santee National Golf Club, which opened in 1989 and underwent a renovation in 2005. This 6,858-yard offering is positioned in a truly natural setting filled with mossy live oaks is a more wide-open layout than Santee Cooper CC and Lake Marion.

There are five other reasonably priced gems within 20 minutes of Santee and another 10 courses within 40 minutes. On the north side of Lake Marion, the Tom Jackson-designed Wyboo Golf Club and the Players Course at Wyboo Plantation head the must-plays. Or, with Interstate 26 just a few more miles south, golfers can make a short day trip to Charleston and play the likes of The Links at Stono Ferry, Legend Oaks, Westcott Plantation and Charleston National to name a few.

The cast of characters who have meticulously and lovingly nurtured Santee has always preferred entertaining a host of happy golfers to Top 100 rankings and empty fairways. Which is why a few years back, when the bottom began to fall out of the economy — as opposed to the Palmetto State’s more popular and luxurious resort destinations such as Charleston, Hilton Head or Myrtle Beach — Santee not only survived, but also thrived. Upscale premium green fees are nowhere to be found around these parts and your dollar definitely goes further. For about $60 during the off-season you can play golf with a cart, enjoy nice accommodations and a full, hearty breakfast the next day.

“Our prices are reasonable, but we’ve also been able to improve our product playability-wise the past few years as well,” said Todd Miller, the general manager of Santee Cooper Resort for almost 20 years who migrated from Peoria, Ill. Miller’s wife, Penny, runs the pro shops has worked at the resort for two decades, while another employee at the resort has behind the desk for more than 30 years.

Santee attracts more than 100,000 visitors annually, particularly states such as Ohio, Tennessee, Virginia and West Virginia. But hearty Canadians en route to a Southern destination during the winter may comprise Santee’s most devoted followers. “Oui oui, I know Santee,” is a popular saying around Quebec. “We have golfers here all year long, and on occasion during December and January we get some weather that makes golfing a little iffy — certainly for southerners,” said Miller. “But Canadians will play in almost any weather when they are in Santee.”

Generations have been coming to Santee and when they come, they tend to stay. Certain golf groups request the same hospitality room year in and year out. And now, it is often grandchildren taking the trip to Santee with their children. “Come to Santee to relax,” could be the town’s unofficial slogan. “It’s OK to relax.”

First and foremost, Santee is a “people place.” Behind golf counters, inside restaurants, hotels and on the streets of Santee you will find friendly faces and welcoming hosts offering good old-fashioned Southern hospitality. Most of the most memorable venues in town are owned and operated by residents.  When you go to the Oasis Bar and Grill, you might meet the owner Dennis, and he might buy a drink. It’s all part of the Santee charm. Coasters is a Santee must-visit for golfers, where the Jack Daniels steak at will rival most cuts of meat along the east coast, while the fish and prime rib at Captain Kirk’s is equally tasty. During the season, Clark’s — which celebrates its 70th anniversary in 2016 — will serve 350-plus people a night.

“People are what make a community and that is what makes Santee different,” said Hannay. “People care you’re here and they treat you that way.”

Writer, editor and media relations consultant Brad King is a former Atlanta sports writer and editor of LINKS Magazine — The Best of Golf. He founded Brad King Communications in 2002, and was the longtime golf columnist for Hilton Head’s Island Packet newspaper. His writing continues to be published regularly in numerous publications and on-line outlets.