A proper perspective on the bah humbug Canadian dollar!

It’s been an amazing few months … and golf weather into December?  In fact the Traveling Golfer teed it up on December 11 at Lionhead where they were using spilt tees on both courses on a 60 degree day!  Where is that sun screen?

But let’s face it, it’s going to snow and it’s going to get cold. Guaranteed. Winter is going to collectively deliver a big kick in the gonads sometime soon. That’s what makes this wonderful country Canada, right?

Yeah, we know the Canadian dollar sucks, but some of what you are going to read below should help you deal with it.  There are still plenty of reasons to pack up and head south. Here are 10 of them: 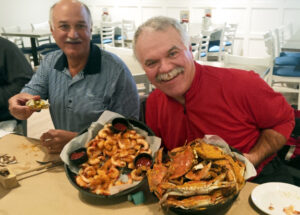 Plenty of eats – all you can eat crabs at Watermans in Ocean City, MD

Let’s start with the obvious – THE PERCENT FACTOR: a 70 cent dollar!  As for the crappy dollar exchange value, look at the bright side, a year ago you lost a whopping 20% when turning your loonies into U.S. dollars. So now it’s 30% give or take a penny or two. An extra 10% is nothing to sneeze at, but when you consider everything else, and NOT having to pay 13% HST on anything you buy!  It’s still a bargain.

IT’S A GAS: No, we’re not talking about eating burritos or chili dogs and the after effects. Not that kind of gas. More like the kind you put in your car, as in cheap gas. Although you can now fill up your car at less than a buck per litre through much of Ontario and sometimes Quebec. But we’re still getting gouged. Gas is much cheaper in the U.S. so it’s not going to cost a fortune to load up the car with a couple of buddies, your golf clubs and a couple of bags of Ruffles potato chips. Filling up a 50-litre tank might cost you $45-$50 here, but that same tank would cost you less than $30 to fill in the U.S.

PUT ON A HAPPY HOUR FACE: Happy hours. Yes, if you’re looking for some bar booze, you have a pretty good chance of finding a happy hour around every corner. And as luck would have it, happy hour is actually happy hours, plural. It’s not exactly prime time, but a little 4-7 pick-me-up can be a good thing.

DINNER FOR TWO: When was the last time you and your significant other or a good friend went out for a nice dinner with maybe a pre-dinner drink, good meal and a bottle of wine for under $100.00?  Easy to do throughout the US and you could probably even include desert!

SHOP TILL YOU DROP: You don’t have to stray too far off the highway or out of your hotel parking lot to find outlet shopping in the United States. In some cases (Delaware), there is no tax, in all cases it’s better than the HST our feds add onto the price tag up here. And while we’re talking about shopping, walking into a store in the U.S. is so much different (and better) than what we’ve got up here in Canuckland. As for bargains, a certain Traveling Golfer picked up two pairs of Perry Ellis pants for $17 in Stein Mart, his favourite shopping destination south of the border.

CHEERS FOR MORE BEERS: It’s enough to give you an extra-strength headache when you walk into Ontario’s beer shrine, The Beer Store. It’s painful to pull out at least $40 to buy yourself a two-four. In the U.S., you can, of course, walk into a supermarket and get heavily discounted beer – sometimes packaged in cases of 30, often for less than 20 bucks. OK, the alcohol content may not be the same, but the original Rolling Rock and Yuengling are pretty tasty when chilled…and have you ever had some fun with BIG-ASS BEERS: Not meaning to dwell on the beer thing, but here we go. If you’re looking for a bit of a walk on the wild side, think about Memphis and New Orleans – specifically Beale St. in Memphis and Bourbon St. in New Orleans. You actually don’t even have to walk into a bar to get served. You can get big-ass beers to go. It’s not drive-inn service, more like walk-by. If you are thinking Memphis – think Mirimichi for golf –stunning – and New Orleans – think TPC Louisiana or English Turn. 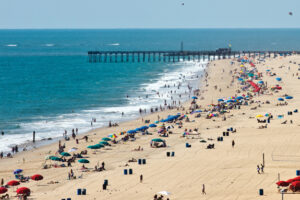 THE SPEEDO FACTOR: OK, so realistically not many of you are going to rock the Speedo bathing suits, right? But at least in some parts of the U.S. you could if you wanted. At least it’ll be warm enough for northerners. Don’t knock it … it beats the hell out of wearing a parka, thickly lined gloves and mukluks. So heading south is always a good idea. It’s warmer, you can golf and you can put on sandals, shorts … or a bathing suit … and sit at an outdoor patio……ever considered Mardi Gras, in early February. If you don’t want to be overwhelmed by beads and boobs, check out the somewhat tamer, but excellent, Mardi Gras celebration in nearby Biloxi, MS.

HOT DEAL GOLF PACKAGES: If you’re looking for golf, fun, southern hospitality and especially value, any of that stuff, there are plenty of great places to go in the U.S. where you can tee it up for outrageously low prices. Check these out! 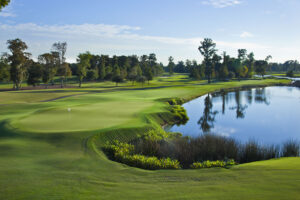 Georgia’s Lake Blackshear Resort and Golf Club (golfsoga.com), two hours outside of Atlanta. You can get a package for as low as $160, including two nights’ accommodation, two rounds of golf with cart and two hours of biking, canoeing or kayaking.

Ocean City (OceanCityGolf.com), home of many high-end, low-cost golf courses, places like Links at Lighthouse Sound, Bayside Resort, Rum Pointe, Eagles Landing and GlenRiddle. This past fall you had 5 rounds and 4 nights for about $260.00, spring is generally slightly more!  But really where else can you find such a deal?

Santee SC America’s value golf destination (SanteeTourism.com), population 800, in South Carolina. You can get three rounds of golf with three nights lodging for as low as $148. While Santee is small, the golf offers a whopping value.

Cheraw State Park. Also in South Carolina unbelievably, you can play the four-star Cheraw State Park Golf Course www.playcheraw.com  for $20 (with cart) into the third week of February and even into the peak season, it’s only $30 to tee it up. The park also has cabins for rent. Also www.m2mgolfsc.com.

MORE BEER for COURSE, OF COURSE: You can get top golf for rock-bottom prices. And then, there’s the beer, yep we’ve come back to beer again. Many courses will set you up with a cooler full of ice and a six-pack of beer. Maybe it’s 12 bucks American money, but it’s a helluva lot better than the $6 -8 plus tip bill some of Canada’s courses stick you with for a single beer.

MICKEY MOUSE AND SIN CITY: Orlando. Las Vegas. Not saying either destination is cheap, though you can get return flights to both much cheaper than it would cost you to go from say Toronto to many parts of Canada. Vegas is Sin City, a bit seedy, a bit naughty and a lot of fun. But if you do not want to go Las Vegas, this Sin City, you always have an alternative. You can arrange Las Vegas directly at home by visiting the best online casino at http://cc-tv.nl/beste-casino/, getting the most quality service and a lot of fun! There are some tremendous golf opportunities as well. Maybe it’s not cheap, but it’s bucket-list material (and if you’re looking for good, but inexpensive golf, check out nearby Mesquite). As for Mickey Mouse, well, Walt Disney World enhances many amazing childhood memories, but there’s also an adult side – have dinner and do some nightclubbing in Downtown Disney.

Tim Baines is a daily newspaper sports columnist with Postmedia in Ottawa. While his golf game shows flickers of hope, he claims he's both a hooker and a slicer. Along his path as a sports journalist - he's been with the Ottawa Sun since 1989 - he's had a tryout with the Montreal Expos and played a round of golf with Alice Cooper. He's also visited and written about golf destinations throughout Canada, the U.S., Ireland and the Caribbean.