My plans to visit Mississippi changed as quickly as an audible called at the line of scrimmage by Alabama’s freshman quarterback Jalen Hurts.  My original plan was for a “for old times’ sake” weekend to celebrate good friend, Janet Leach’s retirement from the State of Mississippi Tourism Office, spend the time with her, hubby Alan and of course the loveable, energetic Buster their Boston Terrier.  There was to be a little golf, some bourbon, maybe a martini or two, some delicious meals and a little Alabama football on TV too!

Then a call from Janet, “you know, we were thinking that if you could come the following weekend you could come and join us for a weekend in Birmingham.  We could play a couple of the Robert Trent Jones Trail courses, go to the Alabama vs Mississippi State game and our friends, the Blakney’s, said there was room for you to stay at their house too.”  You know, I just did not see a down side to that option.  I’ve never been to Alabama before and although Janet and I had worked for Mississippi for years, the Leach’s are Bama fans so we always watched and pulled for them.  Now I can say I am a TIDE fan too!

What a buzz as we rolled from the parking area, along the sorority buildings, and into the Quad area near the stadium filled with tailgaters and merchandisers.  Unfortunately it wasn’t much of a game as the Tide rolled over MS State 51-3.  By half time it became more of a people watching event with more young ladies in high heels and short skirts, you might have thought the half time event was going to be a fashion show.  Not that I’m complaining!

It was just hours after I had booked my flights with Delta that I received an email from Brent Cotton of the Birmingham CVB indicating that his schedule had opened up and we could look at scheduling a site inspection for an upcoming IAGTO North America Convention.  Coincidently the time frame butted up perfectly against my visit on game weekend.  How good is that?! The Birmingham Convention & Visitors Bureau had in June participated in their first International Association of Golf Tour Operators Convention and immediately threw their hats into the ring to host a convention.

If the rest of the cities in Alabama are anything like Birmingham I can’t wait to visit the rest, and if the rest of the golf on the Robert Trent Jones Trail is what I experienced at the Oxmoor Valley and Ross Bridge properties then I will need to spend a lot more time in Alabama!  I was overwhelmed by both!

Both Trent Jones properties are minutes from each other. Two courses at Oxmoor and Ross Bridge, which might be considered a flagship Resort property complete with a Marriott Renaissance, are just about 15 minutes from downtown Birmingham.  And you know this Traveling Golfer loves his Marriott’s!

Birmingham is happening spot let me tell you.  It was a Monday night and after a day of checking out the convention center and touring the city a man builds up a thirst.  Staying at the Starwood property (now part of Marriott, yeah!) The Todd English pub was calling!  For a Monday evening the place is slammed!  “What’s going on” I asked the bartender who had just served me up a craft beer that I actually enjoyed, and enjoyed a lot – Texas Brown Honey.  “Carrie Underwood is playing a couple of blocks away and Bob Dylan tomorrow night.”  Not bad for a Monday and Tuesday night! 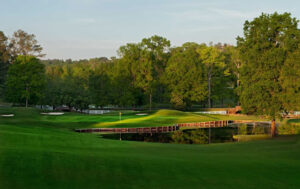 That downtown area (which is actually called Uptown) is an ideal location for golfers.  Within a wedge of the Starwood and Westin are at least another half dozen bars and restaurants and some with roof top seating and atmosphere.  Whomever orchestrated this area of town was an “A” graduate of urban planning!  A 10 minute cab ride gets into 4 other distinct downtown districts.  All combine the historic charm and allure of the south with the energy and vibe of a city that’s move ’n!

The Oxmoor Valley – Valley Course (the other course is the Ridge) was my first taste of Alabama and RTJ Golf and it was all, and then some, as far as expectations!  This is where I was first introduced to our host for the weekend John Blakney.  A very accomplished golfer whose course insight was extremely beneficial in making our way around the tracks.  Birmingham is in the Appalachians so there is plenty of elevation change, a few blind shots to add to the scenic vistas and undulating fairways and greens.  Such a bargain to play to boot with green fees off the street in the $60.00 range.  https://www.rtjgolf.com/oxmoorvalley/

It was off to the Blakneys to meet his wife Joni and the loveable mutt Louie!  Some lab in this big boy, not sure what else.  Friends for life after one weekend and with human Blakneys too!  But of course a must stop at the wine store was a necessary along the way.

The Renaissance Ross Bridge Resort & Spa, a place I could call home, was named as a Top 75 Golf Resort in America by Golf Digest.  Travel & Leisure has also named it as one of the Top 500 hotels in the World.  There should be no surprise that you will find an elegant Spa, fine Mediterranean cuisine in Brock’s, as well as a great pub atmosphere for some casual dining. http://www.marriott.com/hotels/travel/bhmhv-renaissance-birmingham-ross-bridge-golf-resort-and-spa/

The Ross Bridge course has one spectacular hole after another – I have never been disappointed by a Robert Trent Jones course, I refer to his courses as “thinking man’s golf course” if you are not, then you are done!

With John having played here before his advice was invaluable as was evident on the first hole where if you play the obvious shot off the tee and hit it well you might just be wet!  Positioning is everything.  10 holes play along the banks of two very large lakes connected by a spectacular waterfall dropping 80 feet between the 9th and 18th greens.  A gristmill added to the waterfall reflects the history of the old mining site.  Such a great collection of golf holes, they could all be considered signature!  Enjoy the surroundings and focus when you get to the end zone sized greens!

Staying right downtown, not a lot of time but need a golf fix.  Originally established in 1903 as the Country Club of Birmingham – now Highland Park is a great and fun test of golf with spectacular city vistas!  www.highlandparkgolf.com

There are over a dozen courses to choose from in the Greater Birmingham area with most green fees well under $60.00.

There is so much more to see and do in the Birmingham area.  Definitely need more time next time!  One attraction that I did not miss was the Barber Vintage Motorsports Museum complete with its own racetrack and home to the Honda Indy of Alabama.  You have got to know that you too can get out on the track.

The Museum, which last year attracted almost 270,000 visitors, is recognized by Guinness World records as being the world’s largest motorcycle collection.  Over 1,400 motorcycles spanning over 100 years from over 20 countries.

Multiple levels of bikes and cars!

You’ll also find the most extensive Lotus race car collection, anchored by the Lotus 21 and a collection of other rare race cars.  If you have that need for speed visit:  http://www.barbermuseum.org/

If you’re looking for someplace new and exciting Birmingham, Alabama should be on your mind. www.inbirmingham.com

If you have not ventured onto the Robert Trent Jones Trail yet, you don’t know what you are missing – some of the best golf in the world at unbelievably low rates.