Who Let the Dogs Out?

Welcome to the Traveling Golfer’s NEW addition – The Dog Pound.
Sniffing around the golf world to bring you the latest and greatest in new products, fashion, gadgets and other stuff!

As we get through golf show season in Canada and the U.S., you’ll soon notice a big addition to this website and a NEW newsletter, we’re calling it The Dog Pound.

Nice, eh? The Dog Pound – not much here on the travel side, maybe a bit. So let us explain, the key contributors to The Dog Pound are long-time golf industry guy Claudio DeMarchi – The Traveling Golfer and veteran sports columnist Tim Baines. Again, not much there that offers any hint of any canines.

So here’s the story. DeMarchi and Baines have been friends for about 14 years – that’s two in dog years. And over that time, they’ve become known as Little Dog (DeMarchi) and Big Dog (Baines). It used to have something to do with driving distance off the tee, though that isn’t necessarily the case anymore. So when looking for a name for a special project, The Dog Pound was born.

DeMarchi, the one with the moustache, is a golfer who loves to travel to play golf. His company Lakeview Productions Inc. has been an influential part of the Canadian golf industry since 1989.

Baines, the one without the moustache (though he did carry around greying hairs under his lip for many years), is a sports columnist with Postmedia. He’s been with the Ottawa Sun since its birth in 1988 (yeah, right about the same time as the Ben Johnson Olympic scandal) and writes about football mostly. But he also loves to chat about golf equipment and travel, though his handicap suggests the first place he should travel is to an academy to get his game in shape.

You’ve become used to reading all about the world’s best golf destinations at The Traveling Golfer – we’re going to take you in a bit of a different direction with The Dog Pound. We’ll talk plenty about equipment – the latest and greatest innovations. Very soon, we’ll look closer at TaylorMade’s Twist Face, Callaway’s Jailbreak – technology which is turning the golf equipment world on its ear. We’ll look at clothing and shoes and GPS range finders and golf bags and sunglasses and everything in between – things you’re interested in as a golfer. We’ll give you a peek at what’s coming and inside info on what’s already out there. Consider this one-stop shopping – a way to quench your golf thirsts.

Claudio, Little Dog, at the PGA Show in Orlando

Speaking of thirst, we get thirsty – a lot! We do like to quench them too, and we will still be traveling. Big Dog is the beer, Caesar (for our American friends, it’s like a Bloody Mary, but made with Clamato instead of tomato juice and it’s spicier) and burger guy. Little Dog on the other hand is a martini and wine kind of guy who likes the finer dining. Margaritas!!!! Oh, yeah! 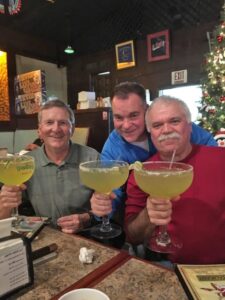 Big Dog and Little Dog with Alan from Mississippi

Big Dog, er … Baines, will also regularly take you on his own little tilted spin around the golf world – the wild and the wacky. Like you know he’s going to have to discuss (with some visual aid), the Sports Illustrated Swimsuit photos of American golfer Paige Spiranac and the ridiculous dress code stipulations put in place by the LPGA.

Sometimes we’ll even get serious, though laughter is always the best medicine.

You can bet The Dogs will be sniffing around trying to bring you the best stories, but sometimes it’ll be just biscuit-size tidbits of information and we will let you dig for the rest. The Dog Pound is ours, but it’s also yours. We’re all ears – kinda like a Basset Hound. We bark a bit and like to sink our teeth into the news of the day – kinda like a Rottweiler. Feel free to fire us off an e-mail (traveling.golfer1@gmail.com) to either say hello or even give us a piece of your mind. We’d love to hear your thoughts and suggestions.

Tim Baines is a daily newspaper sports columnist with Postmedia in Ottawa. While his golf game shows flickers of hope, he claims he's both a hooker and a slicer. Along his path as a sports journalist - he's been with the Ottawa Sun since 1989 - he's had a tryout with the Montreal Expos and played a round of golf with Alice Cooper. He's also visited and written about golf destinations throughout Canada, the U.S., Ireland and the Caribbean.